The majority of businesses in need of new office space focus on build-out allowances or ample parking for staff members and clients. That said, some companies have an added requirement: security. Office space leasing tips for law firms with unpopular clients, or other businesses that cater to a controversial clientele, focus on personal as well as corporate security measures. Even if your company typically does not have these problems, there are a few things you can do that won’t cost an arm and a leg that will improve security.

By the way, these office space leasing tips not only assist law firms in need of heightened security, but they can also help with the prevention of workplace violence. If you are looking for secure office space, contact us today to learn more about how we can help at no cost to you. 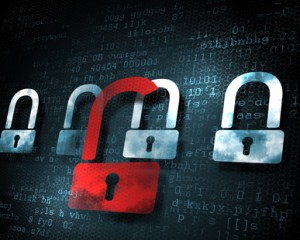 In an age where businesses face a greater risk from hackers and identity thieves than they do from their competition, digital security has become one of the must-haves of today’s business world. No less than 90 percent of businesses suffer from some type of online crime, according to a 2011 survey conducted by Ponemon Research and sponsored by Juniper Networks, making it nearly impossible to avoid by chance alone. Whether your office has dozens of employees or just one, protect your valuable assets and information with a few safeguards.

Don’t think identity theft requires an Internet connection in order to drain a bank account or create bogus credit cards with your name. The Paperless Project reports the average office worker goes through no less than 10,000 pieces of paper each year, according to data from the U.S. Environmental Protection Agency. Any one of these pages can be used by an enterprising thief to gain access to company logins, passwords, sensitive information or finance. A shredder eliminates that gamble. Any given piece of paper put in the garbage can or recycle bin may come back to haunt you if not properly shredded.

The operating systems your computer runs likely have firewalls and failsafes that all but the most enterprising hackers cannot get through. The same cannot be said, unfortunately, about the applications your operating system runs. PC World reports the applications on a computer or mobile represent the primary target for hackers. In annual hacker challenges sponsored by software companies, the prizewinners who crack the security features do so through the apps instead of the operating system. Prevent your office computers from becoming a target by installing software detectors onto every system, updating you about security patches on older systems that have huge loopholes.

If a thief cannot breach your office computers and make away with valuable information, what is stopping them from breaching your office windows and making away with the computer itself? Protect yourself against thieves looking to steal physical material by using a wireless security system that alerts you to breaches and maintains round-the-clock monitoring. ADT offers some tips on securing your office with a security system.

Small Business Computing reports the largest threat to data does not come from hackers or identity thieves, but from accidental deletion, power failures and equipment malfunction. Data backup services give a business owner the security needed to maintain a failsafe in the event of inadvertant failure. Companies such as Microsoft create small business-oriented data backup and retrieval packages in order to provide affordable solutions for companies that need the minimum amount of bandwidth storage. What’s more, they offer cloud backup platforms so anyone linked into the company’s servers may access data from anywhere in the world with a Wi-Fi connection.