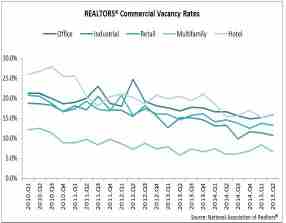 While these steep increases of the office rental rate for the top 10 markets are very sharp, thanks to declining supply, the rest of the office markets in the US are also seeing steady declines in the vacancy rates, as well. A recent report on office space rent by the National Association of REALTORS® confirmed that in the 2nd quarter of this year, office vacancies declined 65 basis points to 15.9 percent, compared with a year ago. This will lead to increases in the office rental rate generally throughout the US office markets.

For tenant’s this means it is better not to wait. Rents will be going up over at least the next year or two until more new construction comes on line. Even then, due to the cost of construction, rents will most likely not decline from the highs achieved. This is especially true in the more desirable office buildings in your market. So, don’t delay or you will see your office space costing even more than it does now.

If you would like some free assistance in locating office space, the top professionals at Office Finder are here to help. Feel free to contact us to find out more.

Finding great Austin office spaces may seem like the Holy Grail, oft talked of, yet hard to find. If you have a business and are searching for great office spaces in the Austin area, let us help find you the perfect option.

Austin has enjoyed a tech boom, solidifying itself as a Texas “Silicon Valley”. With this boom, office space has been scooped up and has become much harder to find. Not only is Austin office space becoming scarce, but with almost 43 million square feet of office space in Austin and a vacancy rate near 10%, asking rental rates are moving upward, too. According to CBRE‘s 4th quarter Austin office report the Class A asking rental rate is nearing $35.00 per square foot with the city wide average rental rate at just under $30.00.

Austin is listed #1 on the Forbes list of fastest growing cities for 2014. In awarding that title, population growth, job growth, and the economic growth rate along with employment data and salaries for local college-educated workers was taken into account. What is not to like? Austin is a great place to set up your office space and do business. There is a ready, willing and able workforce and a good business climate to grow your business.

If you are looking for Austin office space, we can help. We know the Austin market and how to find great office space for any type of enterprise, be it medical offices, small businesses with only a handful of employees or just an office for yourself to conduct your professional business and vocation, rest assured, our local OfficeFinder office tenant reps will find you the best office space for your needs Austin offers.

We are a Better Business Bureau accredited company with years of experience matching clients with the space they need. For Austin, as with all the cities we represent, we gather the information on your business, size, and what specialty needs you require for the office space. We do the leg-work, locating offices in the area of Austin you need along with the needed qualities for the office you are seeking. With a compiled list of potential offices, we then work with our network of local Austin based brokers to arrange tours with you and check out each facility. When you are ready to sign the lease, the broker draws up the contract after listening to your needs and then facilitates the deal with the property management firm or owner.

Should you be looking to buy office space in Austin we offer the same services as for leasing. We do the research and leg-work and then bring in one of the local brokers to begin the process of making the deal and getting you into the office space.

Austin is a great city to conduct business and to live. Let us remove some of the headache by letting us help find the great Austin office space you require.

Just contact us when ready to begin your search for Austin office spaces and we’ll get the ball rolling.

As the capital of Texas, Austin is the second largest state capital in the United States, and the fourth largest city in Texas.  Located in central Texas, Austin became the capital city in 1838, when it was moved from its original location of Houston.

Citizens of Austin, known as Austinites, enjoy a diverse lifestyle, culture, and liberal political environment amidst the more conservative leanings of Texas, as a whole.  This has earned them the sarcastic label “People’s Republic of Austin.”   Environmentally conscious citizens of Austin are resistant to rapid growth and irresponsible development, opting to “Keep Austin Weird.”

Austin’s official slogan is The Live Music Capital of the World.  The city is host to many live music events and festivals, producing the longest-running concert music television program in America, Austin City Limits.  Many a musician has launched their career in Austin, including Willie Nelson, Janis Joplin, Robert Plant, and Stevie Ray Vaughan.

Besides it’s eclectic music and arts scene, Austin  is home to many museums and theatres.  The city itself has been the location of many Hollywood films, such as The Texas Chainsaw Massacre, Dazed and Confused, and Office Space.

Home of the University of Texas at Austin, the city developed into an economic center for technology and business in the 1980’s.  Several Fortune 500 companies have headquart offices here, including Dell (located in the suburb of Round Rock), Apple, eBay, Texas Instruments, and Whole Foods Market.  As the headquarters for many technology corporations, Austin was nicknamed “Silicon Hills” in the 90’s.  With a steady stream of engineering and computer science graduates from the university, and lower housing costs than San Francisco’s Silicon Valley, Austin is considered a high tech mecca.