New York office space has always led the country in design. One Vanderbilt  is the next generation of New York office space. Grand Central Station in New York is still the largest transit hub in the US which makes the real estate around it extremely valuable. Recently, the land across the street on Vanderbilt Avenue was purchased and the existing building demolished. It will make way for a stunning new $3.1 billion office tower called One Vanderbilt. This property will be an innovative new landmark property in the center of the city that remakes the New York skyline. It’s 2020 completion will see a rush of new tenants seeking to enter this exclusive property.

The tower is highlighted by its pointed top that is similar to the Empire State Building and Chrysler Building. The iconic shape will be visible for miles around that will be considered a new landmark with its 1,401 foot height with 1.7 million square feet of interior column free office space.

The building will be highlighted by its column free floor plate and floor to ceiling windows. Those will provide a tremendous feeling of openness and light in the building. Interior company offices will have the options of staircases to travel from floor to floor, providing even a greater feeling of expansiveness. Additionally, those offices will be able to get 360 degree views.

The building will include access to a large, cutting edge auditorium and a 30 seat boardroom among a 30,000 square foot amenity floor. There will be an outdoor terrace and social space for as well. Additionally, the building will feature world class restaurants dedicated to existing tenants.

OfficeFinder is a premium provider of office space referral information and data. Top brokers and real estate professionals are available to assist you in New York City  and1550 other markets.  For more information, please contact us.

Earlier this month, an exciting, new skyscraper in NYC in the making, the West 57th Street Tower, captured architectural news headlines, including Architectural Digest. What catapulted the proposed design into the limelight? For one, the building is slated to eventually dominate one of the New York City’s most iconic skylines, Downtown Manhattan. Its exterior is also expected to look like something out of 12th century Europe. It is also known as the “Michaelangelo Tower” (named by the press), or “The Khaleesi” (in-house code-name). Not up on your architectural history? No worries.

Buildings from that era were known to have a number of marked features. For example, they were typically tall, window-filled, stone structures with pointed arches, flying buttresses and vaulted ceilings. Also, many of those same office buildings boasted a great deal of decorative stone work. Oftentimes, it incorporated mythological themes that included griffins, angels and gargoyles.

The man behind the proposed design is none other than Mark Foster Gage. Gage is known for his unparalleled designs and liberal use of computer numerical control, computer aided design software and three-dimensional printing. They’re among the most creative tools currently available in architects’ arsenals. And Gage’s proposed exterior will undoubtedly impact the new, office building’s interior as well.

With 102-stories planned in this skyscraper in NYC, there will likely be many rentable spaces to choose from. However, details on each retail, residential, commercial and mixed use space have yet to be released because the building’s development is still in the early stages. So what should fans of Gage’s work do in the interim? May we suggest renting office space near the proposed structure or other buildings with historic features?

There are a number of architectural gems in Manhattan and New York City that boast period design elements. To learn more about these existing properties or ones expected to be constructed in the near future, please contact OfficeFinder today. Our local tenant representative can help you find just the right style of office building for your business and their services are 100% free to you.

Happy Holidays to all!

While Manhattan is a relatively small Island at just under 34 square miles, it has over 55 neighborhoods, all of which you could locate your Manhattan office space. Each of those neighborhoods has it’s own “flavor.” In fact, in many of the neighborhoods you will find significantly different business cultures that could either help your businesses or, in some cases, even impede it. Make sure you understand what you are getting into. Deciding where to locate your office space in Manhattan can be a challenge. It is especially important to use the services of a local office tenant rep who really knows the areas you are interested in locating and can communicate their differences to you. 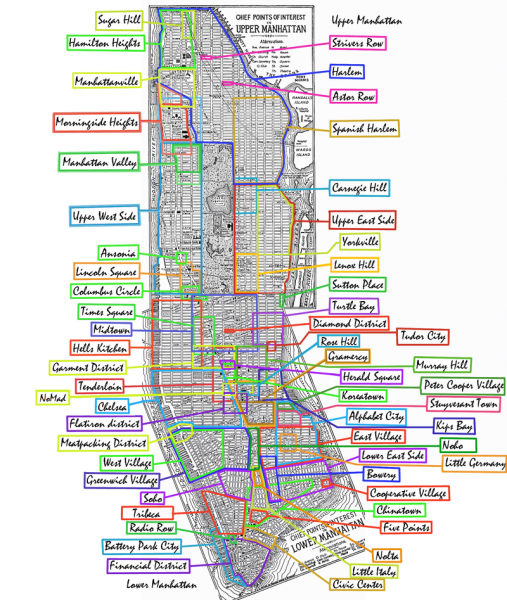 The Manhattan office space market is the largest and most expensive in the US with over 430 million square feet of office space and rental rates in some areas over the $100 / square foot per year mark. To put that into perspective, the second largest metropolitan office market in the US is Chicago at just over one-half that size.

The markets that we get the most requests for assistance in are:
Grand Central
Lower Manhattan
Midtown Manhattan
Times Square
Wall Street / Financial District
To find out more information on those sub-markets, click on the links above.

If you would like more information about how we can help you, we would love to talk with you. Please contact us today.