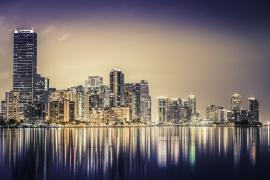 For any established or developing businesses that wish to take part in the available bounty of the stabilizing economies of Latin America the smart choice in leasing is in great Miami office spaces. In a recent article in Forbes magazine, Alex Sanchez, president of the Florida Bankers Association said,

“Miami is the unofficial capital of the hemisphere.”

This is due to the city’s rich diversity and it’s choice geographic location.

Many Central and South American nations and corporations have regional Miami office space, which facilitates international partnerships on U.S. soil. Miami’s southern location in the continental United States, and it’s established Latin-American community over decades, have created strong bonds and a capable bilingual culture that lubricates business ventures. In addition to feeling welcome and comfortable in this international capital, Latin American nations use Miami as a haven for asset management and as a touchstone with American financial markets, due to the U.S.’s stability and reliable system of laws.

In a story by BBC Capital, an increase in tourism and international traffic reflected that since 2013 a surge in the majority of visitors, 51 percent, are reported to be from outside the U.S. Miami International Airport is a big reason for this. A major flight hub for airlines such as American, provides numerous direct routes to major cities all over the hemisphere and at times makes it more convenient to fly to Miami, than to fly between Latin American nations. Once at the Airport, taxi and Metrorail services make connecting with Miami’s downtown, Brickell, and centric entertainment sectors, easy and affordable. Miami city officials are currently working on improvements to the airport’s infrastructure as well as taxi services for the city to further grease the wheels of a fertile and dynamic environment.

With Miami providing tech opportunities, film and entertainment production, wealth management, banking and diplomatic contacts, it is a clear choice for investment and business development. Miami’s wide open office real estate is desirable, attractive and poised for success. Contact us to guide you in finding Miami office space that is right and well situated for your business objectives.